The DC-9 entered service with Air Canada in April of 1966. Terry advises that they were scheduled for April 24 but due to the highly successful proving flights and flight crew training, the regular scheduled service commenced 20 days ahead of schedule serving Montreal-Winnipeg and Vancouver on a daily return basis.

I think that this was the first fleet to be acquired after the rebranding of TCA to Air Canada and, with 36 years of service (April 1966 to January 2002), the longest serving fleet in company history.

I have compiled a list of sixty-one aircraft that at one time flew sporting the Air Canada Rondell. Click here to view my list that includes the fate of each aircraft (as far as I can tell).

Remarkably, I discovered that six of them may still be active and approaching a half century of service. Eight Series 15RC (Rapid Change) that had been originally delivered to Continental Airlines in 1967 served in the Air Canada fleet between 1972 to 1978. See banner image in this NetLetter (above/top) for photo of FIN #763, CF-TOP.  They were the smallest DC-9 variant at 104.4 ft (31.8 m) and were designed for quick conversion between passenger and cargo configurations. We would appreciate your input as to how they were deployed in the Air Canada fleet.

The following aircraft are currently listed as active at Flightradar24.com

Click the image below for a YouTube video posted by Dude8472Productions showing N783TW (formerly AC Fin# 762) landing in Calgary. Thanks Dude! 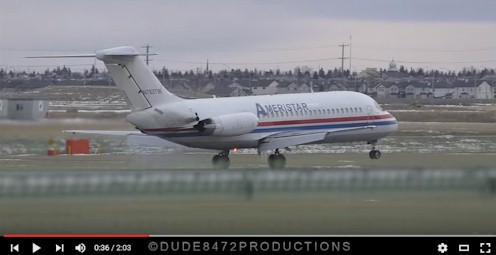 I'd like to throw a question out to our readers. Does anyone recall which aircraft was the first to be painted in Air Canada livery?