Terry asked if I was interested in doing an article on the Bristol Freighter and I have to confess that I was unaware that this fleet had even existed within TCA/Air Canada. The reason for this is that it was introduced the year I was born, 1953, and all three were sold by December 1955, replaced by converted (and more economical) North Stars.

Early editions of the NetLetter have quite a bit of detailed history submitted by our readers that I will try to condense for this article, however, my focus is this aircraft's place in history.

TCA was slow in entering the growing demand for air cargo service so had to find a capable aircraft quickly. The decision was made to acquire three Bristol Freighters (see table below) and deploy them primarily on the Montreal-Toronto-New York triangle with more domestic routes gradually added later. All three aircraft were sold to Central Northern Airways which would later become Transair and be purchased by PWA in 1979.

The aircraft were now utilized to service the Canadian North which, unfortunately, led to the loss of two of them in 1956. CF-TFZ (503) was damaged landing on ice at Beaverlodge Lake NWT in May and CF-TFY (502) went through the ice on landing in Puvirnituq in June.

I was pleasantly surprised to find that one of the aircraft has been preserved and is now mounted for display in Yellowknife Airport. CF-TFX (501) was acquired by Wardair and remained in service until at least 1967 when it became the first wheel-equipped aircraft to land at the North Pole.

It always fascinates me to look into the past and learn about the beginnings of what has evolved into the world of today. The air cargo industry was underserved with growing demand in 1953 and has been growing steadily ever since. Air Canada would continue to increase its cargo operation over the years using DC9’s, B727 & DC8’s and B747 Combis. However, all cargo flights ceased in 1994 with the retirement of the DC8 freighters due to the emergence of dedicated freight carriers. Air Canada has since concentrated on passenger service while still carrying a reduced amount of cargo.

Fedex, UPS, Purolator and many smaller dedicated cargo carriers operate fleets of all cargo aircraft delivering goods around the globe. A few primarily passenger airlines still have some cargo configuration aircraft in service; Cathay Pacific still flies a B747 daily from Hong Kong to Vancouver. 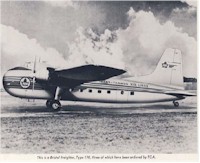 As the on-line ordering for both personal and industrial goods continues to grow so does the air freight industry. Today’s demands are for products purchased across the continent to be delivered overnight and products purchased overseas within a couple of days. Air freight is now critcal to the global economy.

I wonder if anyone back in 1953 considered how the air freight industry would evolve and the brief but significant role of the Bristol Freighter.