The Return of Eastern Air Lines

The story of the original Eastern Air Lines is one of the most tragic in the airline industry. Founded in 1926 in Miami, Florida it was headed for many years by WW1 flying ace, Eddie Rickenbacker. Under his leadership EAL grew to be the third largest airline in the United States and a highly-recognized airline brand. It was, at one time, the official airline of Disneyworld and the dominant carrier on the east coast of the U.S.

While under the leadership of former astronaut Frank Borman, financial and labour issues plagued the airline in the 1970’s and early 80’s. Frank Lorenzo acquired the airline for Texas Air Corporation in 1985 and quickly began the task of destroying the brand. Routes were transferred to the less unionized Continental Airlines, Eastern Air Lines Shuttle was sold to Donald Trump and maintenance was severely reduced on what was left of the fleet (see NL # 1354 The Silver Bullet).

I visited the IAM Winpisinger Education & Technology Center in 2007 and recall viewing an entire showcase in the library dedicated to the infamous exploits of Mr. Lorenzo.  Follow the links below for more detail on the dismantling of the original Eastern Air Lines.

I was more than a little surprised when I received an email from YouTube, regarding new posts to channels that I subscribe to, containing a link to a video of a Boeing 737-800 in Eastern Air Lines livery landing in Calgary on a charter carrying the Florida Panthers.

I dove into Wikipedia to find out that a company named Eastern Air Lines Group purchased the “intellectual property” of the original airline in 2009 and began operations on May 28, 2015. They now have a fleet of one 737-700 and five 737-800’s operating charters for sports teams and Latin American destinations. They have another forty-one aircraft on order.

Ironically, there is still a Donald Trump connection. Aircraft N278EA (the 737-700) was leased by the Trump/Pence campaign and is the aircraft that skidded off the runway at LaGuardia Airport on October 27, 2016 with Governor Pence aboard. Luckily it was only lightly damaged and is back in service.

Over the past generation, we have seen several classic airline brands become part of history. For Eastern Air Lines, it seems that there will be more history to be written. 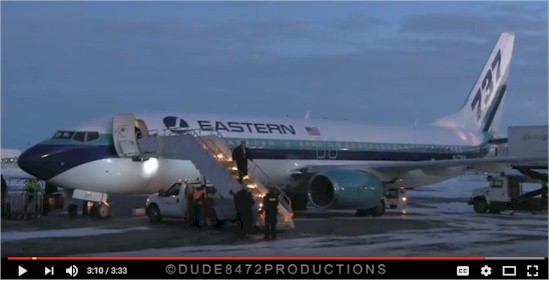 Thanks to DUDE8472PRODUCTIONS for use of the video.
Check out his channel on YouTube; great stuff.