The Bombardier Dash 8 (or Q-Series) is the largest single fleet of aircraft within the Air Canada family of airlines. Currently Planespotters.net list 89 active and 17 retired aircraft in the Air Canada Express fleet.

Air Canada’s website differs slightly with 86 active but does not list retired aircraft for the connector airlines.

Developed and introduced by de Havilland Canada in 1983, the economical turboprop aircraft quickly became a favourite of airlines anxious to expand their short haul service. De Havilland was unable to keep up with demand and Boeing, realizing the market opportunity, purchased the company. Sales did not meet Boeing’s expectations and the company was in turn sold to Bombardier in 1992.

Orders continued to come in from the connector airlines affiliated with Air Canada and C.A.I.L. until the series of mergers that created the Jazz brand in 2001.

Most everyone must have a story to tell relating the Dash 8. No doubt that all airline employees have flown on them at least once. I have twice had the pleasure of riding in the jump seat on short flights. The first was from Victoria to Vancouver for all of fifteen minutes. It was interesting to notice that YVR is visible as soon as the aircraft clears the mountains out of YYJ.

My second jump seat ride was from Edmonton to Calgary during a mild snowfall. There was very little wind and the view of the snowflakes gently falling was a lot fun to watch.

One of my all time favourite rides is the flight from Vancouver, BC to Seattle, WA with the views of mountains to the East and islands to the West. A view that has not changed (except for some taller buildings) since the first Air Canada flight 80 years ago. There are at least a few YouTubers who agree with me. Click the video link below for a sample. 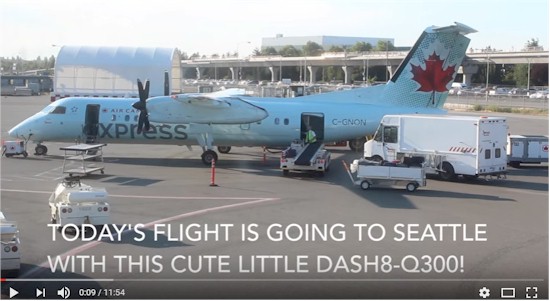