One of my favourite articles researched for the NetLetter appeared in NL Issue 1336 back in February 2016 about the first B727 to enter service in Canada (as well as the first Boeing jet sold to a Canadian carrier).

I was very pleasantly surprized when I received an email from Mr. Doug Keller of Vancouver B.C. advising that he had been searching information for this aircraft and came across my NetLetter article. I tried a Google search myself and found the article by searching for ‘Wardair B727’.

Following is Mr. Keller’s account of his personal experience with this historic aircraft.

I flew on Wardair CF-FUN back in 1970 and I wondered whatever happened to the plane. That is how I came upon your article. In your article, you have a picture of the plane at Gatwick on June 21, 1970. My flight was the next day! Left Vancouver on June 22, 1970 and arrived at Gatwick on June 23rd. Of course, the plane could not make this trip without a refuelling stop. On the way over, we stopped at Frobisher Bay (now called Iqaluit) on Baffin Island. On the return trip, we stopped on Greenland—I think it was at Sondre Stromfjord (now called Kangerlussuaq).

So, I was interested in the article in the newspaper I saw about this plane breaking a distance record. The newspaper clipping (pictured at right) is from the Vancouver Sun, November 10, 1970. I wrote to Wardair for more information and received the attached letter back from them. Click Here to view the letter. 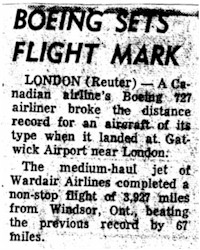 The inflight entertainment was playing Bingo. I think Wardair presented some small prizes but I do not know what they were. Wardair was a charter operation then and people flew with them for the cheaper fares. My flight for the peak summer season was $310.00 return including taxes. That sounds cheap but, actually, that is $1993.00 in today’s dollars (Bank of Canada inflation calculator). That was considered a cheap fare compared to the scheduled operators at the time. Wardair prided itself on their meals and service and I remember that the lunch/dinner served was a filet mignon.

Finally, I remember that there was a section near the front of the passenger compartment on the right (starboard) side. It was a sectioned off area that was either right behind the cockpit or a bit farther back and a crew member that looked like he belonged in the cockpit sat there for the duration of the flight. I don’t know what was going on there (my seat was second from the back) but I suspect this was the navigator (or maybe the flight engineer).

Our thanks to Mr. Keller for sharing his personal memories of tbis unique aircraft. Does anyone have anything to add?