I flew as Maury Belanger’s First Officer on the DC-8 when he first transferred to Vancouver from Montreal.

On the flight I am referring to we flew to Toronto on the first leg and the following afternoon after an overnight in the Royal York Hotel were preparing to locate our driver for the ride to the airport and our return flight to Calgary. Maury was about to go down for the cab when I told him that some changes had been made on the pairings and that we now leave 30 minutes later than previously. When we later started across the lobby towards the front doors I said we now catch it at the back door to keep us clear of all the other vehicles.

As we opened the door to get into cab our driver who fancied himself to be a comedian gave a lingering look at our uniforms and hats and said “where to”? When we finally arrived across from the dispatch offices in Terminal 1 Maury told the driver to leave our bags further along the drive, near the entrance to Terminal 2. I was about to correct him again but decided that I had advised him of enough changes on this trip and said nothing although operations were concerned about the security of leaving them in the open as we had done for a number of years. Flight planning completed we started the walk over to Terminal 2 and when we approached the access to our aircraft we couldn’t find the bags. Time was becoming a factor when we entered the aircraft without flight bags.

I started out on a search while Maury stayed behind and completed the pre-flight checks. I hailed an RCMP car and driver and explained my problem. We drove to the limousine office at the other end of the building and explained the situation to them. They replied that now that our company was no longer using their service they had no idea where bags might be. I told them that if someone didn’t come up with them soon an aircraft with 150 passengers on board was going to be delayed at the terminal building and that someone would certainly pay dearly. “Amazing”, two sets of book bags were found inside and I was on my way minus our overnight clothing suitcases. They were still missing.

Overnight in Calgary with a small shaving kit supplied by Air Canada but no change of clothes, flight back to Toronto for another overnight stay and as we walked by a lost baggage storage room we looked in and high on a shelf found our bags with tags that told us they had been to Niagara Falls and back by bus. So much for a glib cab driver who thought he was Jack Benny and a disgruntled limousine dispatcher who decided to punish us for the sins of our planners.

Maury Belanger passed on 30 March 2012. During the war he flew coastal command and was awarded the DFC (Distinguished Flying Cross) for three attacks on enemy submarines in the outer Gulf of St. Lawrence.  He was a soft spoken gentle man and attended our retired pilots’ luncheons without fail and with apparent enthusiasm. I enjoyed flying with him. 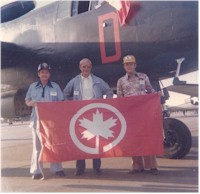 Since CF-TCC is airborne again for the 80th anniversary, here is a picture of the three people who "discovered" the original L10A aircraft in Harlingen Texas at the Confederate Air Force airshow. It was flown in from Plant City Florida.

On the left is Roger Slauenwhite retired sales manager and Pionair, Bob Rathwell sales manager (now deceased), and Ernie Sykes airport personnel (went to Standard Aero Montreal). CF-TCC (at this time had an American registration) was parked directly behind this B-25, flown in for the show from Hamilton Ont. (CWH).

On our return to YYZ we advised Ted Morris in Toronto P.R. of our finding. Ted called Montreal P.R. and set the wheels in motion. The rest is history. Ted was instrumental in making this all happen (a good P.R. man). Otherwise this aircraft might still be flying freight around the southern United States, which was its previous task. Hats off to Ted Morris.