India most female friendly for pilots 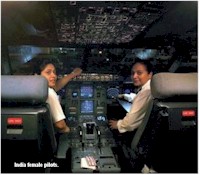 The country with the highest ratio of female airline pilots may come as a surprise to some. India has the most female pilots per capita as a little more than 12% of Indian airline pilots are women.

Finland is neck and neck with India but most other countries are far behind that total. In the U.S. it's 5.1% and worldwide just 5%. India was late in the game in hiring females for the flight deck, but its airline industry is also fairly new. The first female F/O started working in 1984.