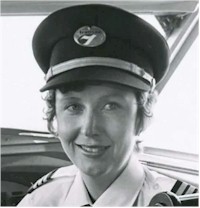 Pioneering female aviator Rosella Bjornson has been awarded the Alberta Order of Excellence in honour of her achievements in the industry, advocating for woman pilots.

The Canadian recalls an incident in 1974 when she was the only female commercial airline pilot in North America. Contacting the tower on approach to Calgary a baffled controller asked ''When did Transair start allowing flight attendants to use the radio?"

It was, says the 71-year old now retired from flying, a typical response at the time. However - while the cause of gender equality of the opportunity on the flight deck might still have some way to go - it is, thankfully, one you are unlikely to hear now.