To great heights from an early age. 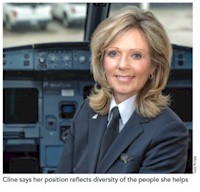 Lori Cline became the youngest airline captain in the world on the day of her 23rd birthday. Now she is chief pilot at American Airlines' second-largest hub Charlotte Douglas International in North Carolina, USA.

How did you get started?
I started flying before I was driving, taking lessons in my grandfather's Cessna 172 at the age of 13. Attending Indiana State University she received a BSC with double major in Aviation Admin & Professional flight.

What was your first job?
Helicopter pipeline patrol.

What came next?
I was hired by Atlantic Airlines in 1981. I was passed over nine times for captain as I was not old enough to get my air transport pilot (ATP) certificate, you had to be 23.

Six weeks before my 23rd birthday, a captain's slot opened and I got my endorsement for the ATP on the day of my 23rd birthday and on that very day hopped into the left seat to fly as the youngest airline captain in the world.