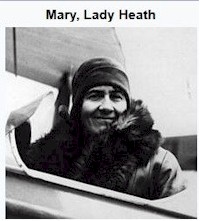 Lady Heath became the first woman to hold a commercial flying licence in Britain and along the way, set records for altitude in a small plane and later a Short seaplane, was the first woman to parachute from an aeroplane (landing in the middle of a football match).

After her great flight from the Cape, she took a mechanic's qualification in the US, the first woman to do so.