"The reason I am emailing is to ask if the NetLetter will have something on the Canadian pilots who flew with Kenn Borek Air (Twin Otter) to the South Pole to rescue 2 people for medical reasons. We don't take a back seat to anyone when it comes to flying! Typical Canadians - we hardly hear anything more about these courageous aircrew. We just have a "get her done" attitude and move on. Anyway just an incredible aviation feat!"

I agree, although it was on the news, it didn't get the coverage it deserved. I've created a link to a news story that I found on YouTube (Canadian CBC News).

It's the Canadian airline that doesn't always use runways.
That's how company president John Harmer succinctly describes Kenn Borek Air. The Calgary-based company sends its 40 aircraft and 240 employees to some of the most remote locations, through dangerous conditions and on difficult terrain. 'We do work that a lot of people won't do or don't do.' - says Gerald Cirtwill, Kenn Borek maintenance engineer.

Recently the airline has flown planes in Sri Lanka, Costa Rica, Turkey and in the Maldives, transported oil workers in Africa and travelled in East Timor. Crews are often switching the landing gear between wheels, floats and skis. Some of its assignments include performing surveys and supporting the scientific community on every continent and travelling to both poles. Below is a news video of a rescue mission to the South Pole in June 2016.

The A321 entered service with Air Canada with the delivery of Fin # 451 in November 2001. The aircraft is the largest of the Airbus A320 family and has been deployed on domestic and transborder routes that warranted higher capacity than the A319 or A320 giving the company a lot of flexibility of scheduling.

Five more aircraft have been acquired for the Rouge brand. This is the only Rouge fleet where new aircraft have been ordered. Fins 468 to 472 were delivered between November 2015 and May 2016 and are being deployed mainly on sun destinations.

Click Here for Skiesmag.com article on the Rouge A321 delivery.

Click the image below for a YouTube video of Fin # 468 landing in Hamburg after its first test flight. Note that it still has the original registration D-AVFX (now C-FJOK). 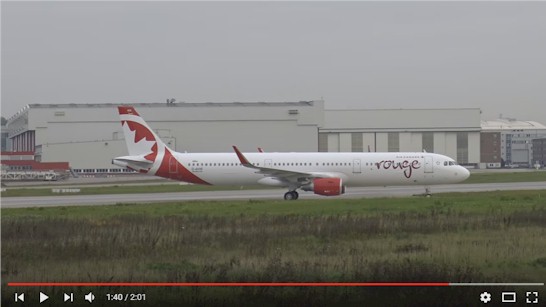 Note. F/O Forester took this photo of XO from XR (note front of float). XO flown by F/O Sunnucks.These two Fairchilds were based at Senneterre, Quebec with Forester as senior F/O. A point of interest, above the tail is the Catholic Church and parsonage, and above that the school with the various paths leading to it. Log booms and mill to the right. The seaplane base is a few miles out of town. The aircraft were equipped with Fairchild Aero cameras complete with 3 magazines each and were electrically powered. Amazing clarity!

Thought you would be interested. Norm Forester went on to fly for CPA (DC-3’s) in Quebec. He was one of the best as a photographer and Navigator. Legendary Wop May asked Norm to come to Edmonton, in 1941, to teach at the Air Observer’s School. I think I mentioned he was inducted into Canada’s Aviation Hall of Fame.

This Dave Mathias cartoon is from the "Between Ourselves" magazine issued March 1967.