A Lockheed Super Star Constellation, one of only 44 ever built, is expected to roll out of a hangar in Auburn, Maine, sometime this year, after a seven-year restoration effort, the Boston Globe reported this week. The airplane, built in 1957, was bought at auction in December 2007 by a nonprofit arm of the Lufthansa airline, and reportedly up to $60 million so far has been spent on the project.

From the YVR e-magazine December 2014
A list of the greatest Canadian inventions made the rounds of mainstream and social media last month, timed to coincide with Canada Day. It's an impressive line-up. Some inventions are noble and life-changing: Insulin, Sonar, the electron microscope. Others are great fun: Ice Hockey, Five Pin Bowling, Imax. Still others are just plain delicious: Coffee Crisp, The Bloody Caesar Cocktail, Peanut Butter, McIntosh Apples. 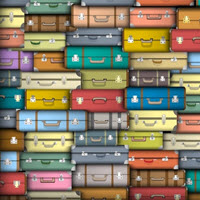 But it's this practical invention that really elicits a mouth-watering response from us airport types: .

Moncton, New Brunswick native John Michael Lyons patented the world's first "separable coupon ticket" on June 5, 1882. In its early form, baggage tags were used for rail travel and consisted of a piece of perforated paper with the station, destination and number printed or written upon them. The upper half was attached by a strap to the piece of luggage, while the lower half went to the passenger.

Since its inception, a lot has changed with this humble workhorse of the travel industry.  Today, tags are printed thermally and feature barcodes read by automatic tag readers to enable automated sorting and delivery to the correct aircraft through airports' complex baggage belt systems. And in keeping with the self-service check-in trend pioneered at YVR, many of today's bag tags are printed by travelers themselves. In fact, in 2012 YVR passengers printed a whopping 1.3 million baggage tags from kiosks in our check-in areas.

Let's raise a spicy Caesar to Mr. Lyons and his indispensable invention.