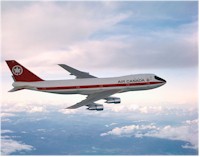 My favourite personal experience with this fleet was flying on Fin 303 from Toronto to Las Vegas. The aircraft was (at the time) configured for sun destination charters with 497 economy seats. I was seated on the bottom deck at the front of the aircraft when it was suddenly hit by lightning just at the beginning of the descent into Las Vegas. There was a Big Bang and then a fireball sped through the cabin. Everyone on board caught a glimpse of the “Bright Lights” before we even got to the Big City. Ironically, it happened so quickly that there was no time to be frightened. I flew on Fin 303 a few more times before it was retired and always felt a particular bond with this aircraft.
Sources: and . To view a “Classic” landing in Toronto